When I was a kid, I loved egg noodles with butter and breadcrumbs on top. My mom boiled egg noodles on the stove, but this recipe for Instant Pot egg noodles is really easy and fast.

After the noodles are cooked, I always add a generous pat of salted butter. For even more flavor, first melt the butter in a skillet over medium heat for about 5 minutes until the butter turns golden brown.

Egg noodles cook very quickly in a pressure cooker. The greatest risk is overcooking the noodles, making them very soft or even mushy.

After cooking many batches of noodles, I've settled on the best way to make Instant Pot egg noodles.

The amount of water used when cooking Instant Pot noodles can vary, depending on the recipe. But as a general rule, use 2 cups water for every 8 ounces of noodles.

This won't be enough water to completely cover the noodles. That's okay! You don't want too much water in the pot - it defeats the whole purpose of using a pressure cooker for pasta.

The purpose of a pressure cooker is that it helps pasta absorb the salty, starchy water that it cooks in. This gives the pasta flavor and also help sauce cling to the noodles.

What's the best way to cook noodles in a pressure cooker?

Depending on the type of noodle, the pasta might need to rest for just a few minutes, or up to 10 minutes.

This method gives you a lot of control and makes it less likely that the noodles will be soft and mushy. As soon as they reach the perfect texture, transfer the noodles to a serving dish.

Egg noodles are different than regular pasta, because more eggs are added to the dough. Some types of regular pasta also contain eggs, but many types of dried pasta don't contain any egg at all.

Eggs give the pasta a slightly thicker, chewier texture. Egg noodles are wide and short, usually with a slight twist.

Can I freeze cooked egg noodles?

I don't recommend it. After being frozen, the defrosted noodles have a mushy texture.

Are these the same noodles used in pho?

No. For the Vietnamese soup called pho, rice noodles are usually used.

Are these noodles the same as Chinese egg noodles?

Does this cooking method work for homemade egg noodles?

No. Homemade or fresh noodles cook faster than store-bought dried pasta. I wouldn't use a pressure cooker to cook homemade egg noodles.

Can I use the same water ratio and cooking time for other types of pasta?

The cooking time varies depending on the type of noodles that is being cooked in the pressure cooker. But the ratio of 2 cups water for every 8 ounces dried pasta generally works well. 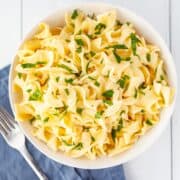 Perfectly cooked, buttery egg noodles! Instant Pot egg noodles cook in just 1 or 2 minutes and can be turned into a comforting, flavorful meal.

See the recipe notes for noodle to water ratios if you want to make more than 8 ounces of dried egg noodles.

Use the same cooking time for 12 or 16 ounces of noodles, but adjust the amount of water and salt.

This recipe is for regular, wide or extra wide egg noodles, not fine egg noodles (which are more similar to angel hair pasta)

This recipe was tested in a 6-quart Instant Pot