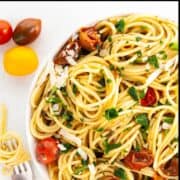 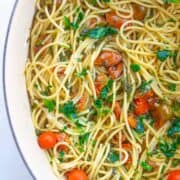 In this magical recipe for one-pot spaghetti with tomatoes and kale, starchy pasta water creates a flavorful "sauce" for the noodles. This easy and fast dinner recipe is made using frozen kale or frozen spinach.

This one-pot method for cooking spaghetti is brilliant in every way. It's easy, fast and will make the most flavorful spaghetti you've ever eaten.

That's a big statement, so let me clarify. This isn't red sauce and meatballs spaghetti. That's a whole different category. This is a simple bowl of pasta tossed with olive oil, garlic, tomatoes and kale. But something truly magical happens when everything is cooked together in one-pot.

The pasta water is absorbed by the noodles, creating a starchy "sauce" with amazing flavor. Honestly, you have to try this recipe yourself to understand why it's so good. There's something magical about watching a few simple ingredients come together quickly into such a delicious meal.

My family loves the flavor of this pasta with kale and tomatoes. And I love how easy and fast this recipe is!

I use the same one-pot pasta method to cook penne pasta with frozen vegetables.

Spaghetti: I've only tested this recipe using spaghetti noodles, but it should also work with other long noodles like fettuccine or linguine.

Frozen Kale or Frozen Spinach: Look for frozen "chopped" spinach or kale, which easily blends into the pasta. For this recipe, frozen greens have a better texture than fresh greens.

Tomatoes: I like using cherry tomatoes, sliced in half. You can also chop whole tomatoes into small, bite-sized pieces.

Olive oil, garlic and salt: Pantry basics that are needed for the recipe

Equipment: You'll need either a Dutch oven or deep skillet with a lid. The cooking vessel you choose should be wide enough to fit dry spaghetti noodles. I find that using my Dutch oven works the best.

Step 4: Add 4 ¼ cups boiling water. Simmer the spaghetti for about 8 minutes, moving the pasta around with tongs so it doesn't clump together.

Step 5: When the noodles are tender and most of the water has been absorbed, sprinkle parmesan cheese on top. Put a lid on the pot and let the pasta with kale and tomatoes rest for a few minutes before serving.

For detailed instructions and specific ingredient amounts, see the recipe card below

After making this recipe once, you'll start thinking about variations you'd like to try in the future.

One-Pot Spaghetti with Tomatoes and Kale 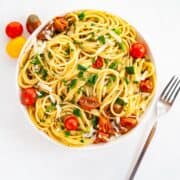 In this magical recipe for one-pot pasta with kale and tomatoes, starchy pasta water creates a flavorful "sauce" for the noodles. This is a quick, easy and really flavorful pasta dish.

This recipe was adapted from the New York Times recipe for One-Pot Spaghetti with Cherry Tomatoes and Kale.