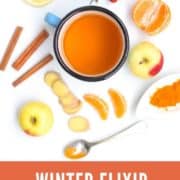 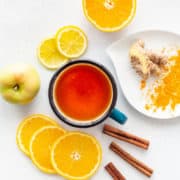 Ginger, cinnamon, turmeric, honey and apple cider vinegar make this soothing and delicious remedy for sniffles, sore throats and those winter days when you need a little pick-me-up

This winter elixir, made from ginger, cinnamon, turmeric, honey, apple cider vinegar and other immunity-boosting ingredients, is both soothing and delicious.

To be honest, I don't just drink it during the winter. I also love this elixir poured over ice on a hot summer day.

I keep a jar of this magic potion in my fridge so it's ready when I need it. Sometimes I sip it cold over ice or with a spritz of seltzer water. Sometimes I drink it steaming hot in mug with lots of honey.

I often add a dropperful of elderberry or echinacea. And yes, I have been known to occasionally add a shot of vodka or whiskey.

Although it doesn't always chase away a cold completely, it does deliver relief for a sore throat or stuffy nose or just an afternoon when I'm feeling run down.

After making the base for this elixir, you can personalize it by adding ingredients to soothe whatever ails you.

Ginger, cinnamon, turmeric, honey, apple cider vinegar and other immunity-boosting ingredients make this soothing and delicious remedy for sniffles and sore throats. It can be made in the Instant Pot or on the stove top.

I also love this elixir, served hot or cold, as a caffeine-free afternoon pick-me-up.

I keep the elixir in a glass jar or pitcher in the refrigerator so it’s ready when I need it.

You can drink this winter elixir hot or cold. Before drinking, adjust the flavor of individual servings by adding more honey, or lemon, or juice, or add a dropper of liquid Elderberry or liquid Echinacea. When I’m congested, I sprinkle in a little cayenne pepper. And yes, you can also add a shot of vodka or whiskey.

You can also freeze the elixir in an ice cube tray and keep the cubes in a Ziploc bag in the freezer. Pop an elixir ice cube into a mug of tea or add elixir ice cubes to sparkling water.