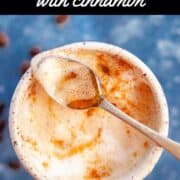 Maple syrup coffee is easy to make at home, either hot or iced. Rich coffee (or espresso) is swirled with maple flavor and fall-spiced cream that's lightly sweetened with maple syrup.

Where I live in Los Angeles, we don't exactly have fall weather. Which is why I absolutely love recipes like maple syrup in coffee that bring autumn vibes into my life!

If you've also been craving cozy autumn flavors, then this coffee is for you!

To make maple coffee, a combination of maple flavoring and maple syrup are swirled into a rich and creamy cup of coffee topped with a light sprinkle of cinnamon or pumpkin spice.

You can control how sweet the coffee tastes. Perfect for coffee lovers who don't want a sugary drink!

How to Add Maple Flavor to Coffee

There are three ways to add maple flavor to coffee:

The ingredients in maple flavoring syrup aren't all that different from maple-flavored syrup that is used for pancakes (like Log Cabin Maple Syrup.)The maple flavor doesn't come from real maple syrup. It comes from natural and/or artificial flavor chemicals that are created in a food lab.

If you're also going to add pure maple syrup to your coffee, then you can add this type of maple flavoring without adding a lot of sweetness.

Rather than adding maple syrup directly to coffee, I like to sweeten milk with maple syrup, then top my mug with maple-sweetened foamed milk.

Coffee: Brew the coffee however you like. It can be hot coffee or iced. You can also use 2 shots of espresso and make a maple latte.

Milk: Add milk, cream or half and half - are all delicious! You can also use any type of plant-based or nut-based milk, just buy an unsweetened version.

Maple syrup: Use real maple syrup, with no added ingredients

Where Does Maple Syrup Come From?

Pure maple syrup comes from trees, it's that simple! Sap is tapped from a maple tree and then boiled into a concentrated syrup.

Here's a fun video about a family that makes their own maple syrup as a hobby. Or, you can watch a video about the Maple Guild in Vermont that shows how maple syrup is made on a large scale.

All grades of real maple syrup have only one ingredient: maple syrup.

As of 2022, labels should start indicating that real syrup comes in 4 different grades that are differentiated by color. Previously, syrup was graded either "A" or "B" which was little bit confusing, since "B" actually had more flavor.

Now, the four grades of syrup are all "A" but have descriptors added. Color is the main descriptor because color indicates flavor. The darker the syrup, the stronger the flavor.

Grade A | Amber Color and Rich Flavor: A darker color and stronger flavor. Can be used for breakfast foods and for baking and cooking.

Grade A | Dark Color and Robust Flavor: Strong and pleasant maple flavor, for those who really like maple. This use to be sold as grade "B".

Both honey and syrup will add noticeable flavor to your coffee.

Maple syrup has a distinctive maple and caramel flavor that can't be found in other sweeteners.

Honey is known for having a sweeter, more floral flavor.

Honey and maple syrup are both liquid sweeteners. However, syrup is thinner and not as thick as honey. This makes it easier for maple syrup to dissolve into both hot and iced coffee.

Honey will dissolve into hot beverages if the drink is mixed or shaken well, but in cold beverages honey clumps and thickens, making it harder to mix in.

FAQ About Syrup and This Recipe

Yes. Real maple syrup is made from tree sap and is vegan.

How long does maple syrup last?

Opened bottles of real maple syrup should be kept in the refrigerator.

According to some maple syrup producers, opened maple syrup it lasts closer to 2 years. If maple syrup does go bad, you'll notice a thin layer of mold on the top.

What are the best maple syrup substitutes?

There really isn't a sweetener that's exactly like maple syrup! It's a unique product straight from nature.

In terms of flavor, molasses is the closest to maple syrup but it has a much stronger flavor.

For baking, you'll need to take into account the flavor, sweetness and moisture content if you want to use a substitute for maple syrup. King Arthur Baking has a guide for baking with liquid sweeteners.

What is the easiest way to froth milk?

I love my Nespresso milk frother, but they've gotten really expensive since I bought mine years ago. There are many other brands of electric milk steamers out there.

You can also lightly froth milk by pouring milk in a glass jar, heating the milk in the microwave, and then shaking the jar vigorously. It won't make thick, creamy foam but it will make light, airy foam. 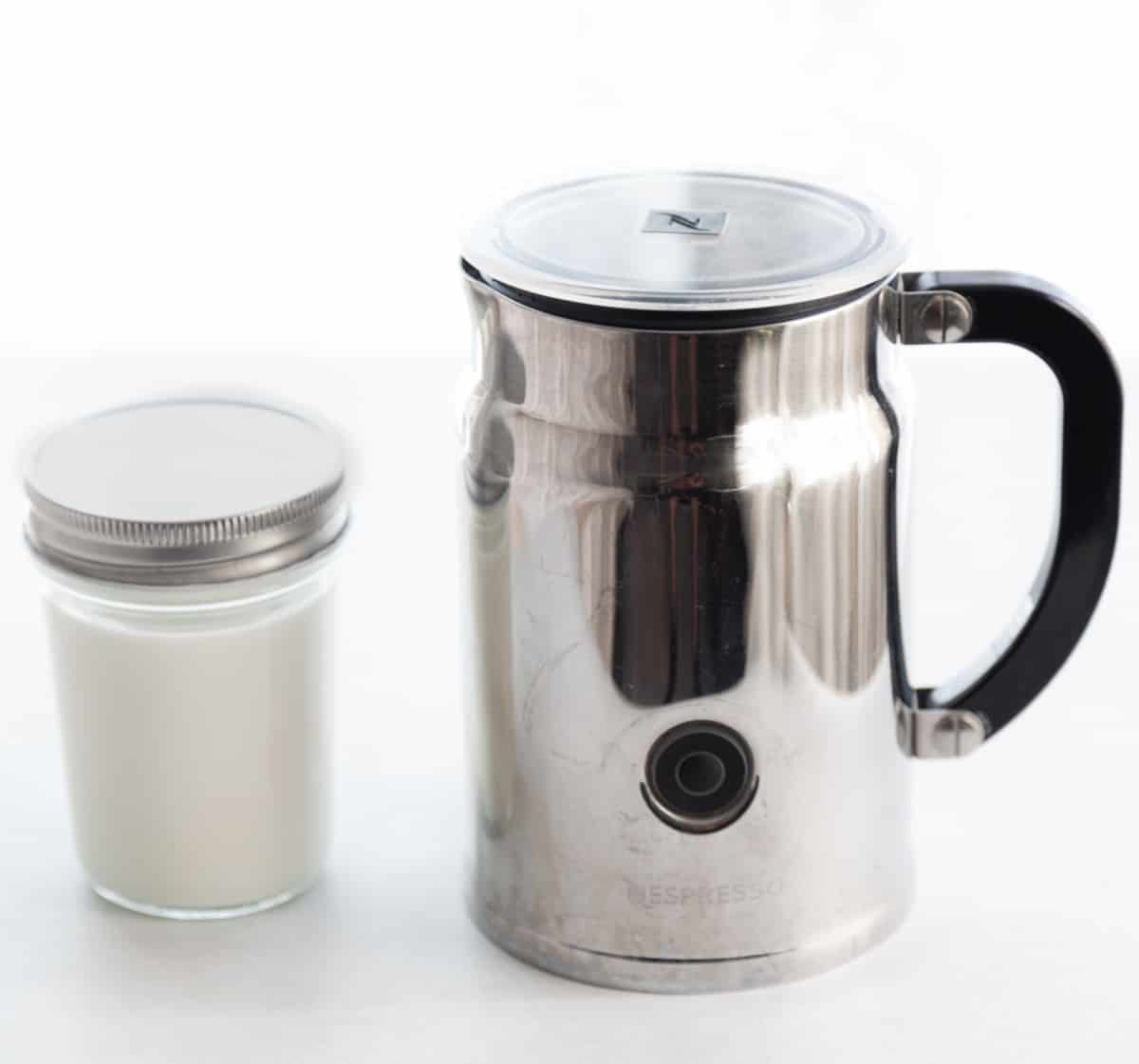 Can I make a maple latte using this recipe?

More Recipes That Use Maple Syrup 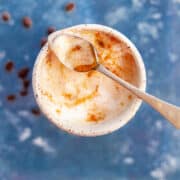 Maple syrup coffee is easy to make at home, either hot or iced. Rich coffee (or espresso) is swirled with maple flavor and cream that's spiced with cinnamon or pumpkin spice & lightly sweetened with maple syrup.

If making iced coffee, just combine all ingredients in a glass or jar and mix or shake well. Some milk frothers can froth cold milk, if you want to do that instead.

For a latte, use ½ to ¾ cup of milk and substitute 2 shots of espresso for the coffee.