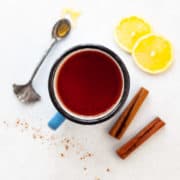 A simple and invigorating cinnamon tea that can be served cold over ice or in a hot mug as a soothing remedy for colds.

I've always liked the idea of tea more than I actually like tea. Holding a warm mug of tea in the afternoon or before bedtime just sounds so...soothing.

But what can I say, I'm a coffee girl through and through.

However, I have to admit that this homemade cinnamon tea has won me over. It has the warming, naturally sweet flavor of cinnamon without tasting too spicy.

And, it's so easy to make! I like to make large batches, as the tea keeps well in the refrigerator. You can pour a glass over ice, or heat it up for a mug of hot cinnamon tea.

To make cold or hot cinnamon tea, you only need two ingredients:

You can make cinnamon tea on the stove top or in a pressure cooker. I prefer using my Instant Pot, because the flavor is richer and the tea is ready faster.

Stove Top: Combine water and cinnamon sticks. Cover the pot with a lid and simmer gently for 10 minutes. Turn off the heat let the tea steep until desired flavor is reached.

This tea has a subtle, gentle flavor. My kids really like it plain, or they make cinnamon honey tea by adding a drizzle of honey to their mug.

I enjoy adding one or two extra ingredients for even more flavor. Add any of these ingredients after the tea has already brewed.

The longer I live in a hot climate, the more I have come to enjoy iced tea. It's just the thing when you need a pick-me-up around 3pm, or something refreshing and non-alcoholic in the evening.

First, follow the recipe card below to brew hot cinnamon stick tea. Then store the tea in the refrigerator and pour it over ice before serving.

Cinnamon tea poured over ice is invigorating with a simple, pure flavor. I always add a big squeeze of lemon to brighten the flavor and turn the tea into refreshing lemon cinnamon water. Try topping your glass off with sparkling water to make it extra refreshing.

This tea is also amazing served warm in a mug drizzled with honey. With every sip you get to smell the soft, spiced aroma of cinnamon. It's soothing and good for the soul.

If you'd like to add caffeine, then drop 2 black tea bigs into the water with the cinnamon sticks before brewing the tea.

A Remedy for Sore Throats and Sniffles

For both kids and adults, cinnamon stick tea can help soothe sore throats and stuffy noses.

Add more healing power by adding one or more of these ingredients to your brewed cinnamon tea:

You can add these 2 ingredients to the tea before it's brewed. Simply drop them into the water with the cinnamon sticks, then brew the tea.

If you want a remedy with more kick to it, try my Winter Elixir made from ginger, turmeric and cinnamon.

You might also enjoy garlic, ginger and lemon tea, which is more savory than sweet. For a cozy treat, try maple syrup coffee.

What exactly is cinnamon?

Cinnamon is tree bark from a variety of tropical evergreen tree. Here's an interesting video that shows how cinnamon is harvested.

Is there different types of cinnamon?

According to The Spice House, there are over 250 plant species in the cinnamon genus. The main varieties of culinary cinnamon are Ceylon, Cassia and Saigon.

If you're buying cinnamon sticks in an American grocery store, it's most likely Cassia cinnamon.

Does it matter what type of cinnamon sticks are used for this recipe?

I use generic cinnamon sticks from the grocery store, which are most likely cassia cinnamon. You can experiment with different types of cinnamon, and see which type you like best.

I've noticed that some grocery store brands of cinnamon sticks have more flavor than others, so if your tea doesn't have enough flavor, this might be why. Buying tea from a spice company usually will get you more flavorful cinnamon sticks, because the quality is higher and they are fresher.

Can I reuse the cinnamon sticks after making a batch of tea?

Cinnamon sticks lose most of their flavor after one brewing. However, instead of throwing the sticks out, they can still add a lovely scent to a pot of simmered pot pourri to make your house smell nice. 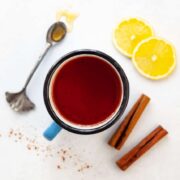 Cinnamon tea can be served hot or cold. It's soothing on a cold winter day and refreshing on a hot summer afternoon. You can make this tea on the stove top or in a pressure cooker.

Once the tea is brewed, it can be served hot or cold. It doesn't taste as good at room temperature.

Read the blog post above for additional ingredients that can be added after the tea is brewed. I like adding a squeeze of lemon. You can also add ingredients like honey, orange juice, drops of echinacea, grated ginger or apple cider vinegar.

You can combine cinnamon stick tea with other types of tea by adding 2 tea bags to the water before brewing. An herbal tea like chamomile or caffeinated tea like black tea are both good.