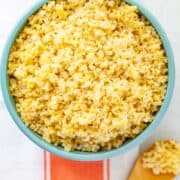 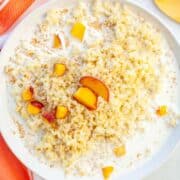 Instant Pot millet can be cooked like pilaf or like porridge, turning this mild-flavored gluten-free grain into a variety of sweet and savory millet recipes.

Millet is a whole grain that's less well-known in the U.S, although gaining in popularity because it's gluten-free. It has a mild flavor that's sometimes described as nutty, although I think it's very similar to cornmeal.

Millet is hearty and filling. The tiny grains plump up into small pearls with a texture that is similar to, but slightly more coarse than rice and couscous.

There are two ways to make millet in a pressure cooker - like pilaf or like porridge. The recipe card at the bottom of this post includes instructions for both.

Pilaf Method: This means adding just enough water so that the cooked millet has a fluffy texture, similar to the texture you'd want for rice. Although regular pilafs use aromatics and broth to add flavor, both are optional here. You can make Instant Pot millet with just water, millet and salt. Or, you can saute onion, garlic and spices in the pot and use broth instead of water.

When cooked like a pilaf, millet can be served as a replacement for rice or other grains. It can also be turned into cold salads or added to soup for texture, and it can be baked into squares that are cut and served like firm polenta.

Porridge Method: This method adds more water and a longer cooking time so that the millet is softer. Millet porridge still has some texture (similar to steel cut oats) but when milk is added after the cooking time, the porridge becomes looser and creamier.

Millet porridge can be served sweet or savory. I love adding cream or oat milk to my porridge with maple syrup and peaches. Yum!

For savory porridge, add cream or broth to the cooked millet plus toppings like grated cheese, sour cream, chives, bacon, mushrooms or soy sauce. You can also make a soupy millet porridge called millet congee, by cooking the millet for almost twice as long with twice as much liquid.

Why This Recipe Works

This recipe makes millet that is less dry than other recipes, but still has a fluffy texture. By adding slightly more water, the texture becomes softer and less coarse. It's a matter of personal preference, but I like this grain with a slightly softer texture.

To make millet porridge - which has a softer, looser texture - the amount of water increases to a 4:1 ratio of water to millet.

Is Millet a Whole Grain?

Yes, millet is a whole grain. According to the Whole Grains Council, there are several related grains that are all called millet, including pearl millet, foxtail millet, proso millet, ﬁnger millet and fonio.

Where Can I Buy Millet?

Although millet is a staple for a large portion of the world's population, it can be harder to find in the United States. It can be bought online or in the grain/rice aisle of some grocery stores. It's easiest to find in speciality or health-food stores, and in markets like Whole Foods.

Can Millet Be Added to Bread and Muffins?

Yes, in two different ways. Uncooked millet grains add crunch to bread or muffins. Secondly, you also have the option of baking with either millet flour or flakes, which are versions of ground millet used to make gluten-free baked goods.

Can I Use the Instant Pot Porridge Setting to Cook Millet?

No, use the manual setting. The porridge setting is programmed to cook for 20 minute at high pressure, which is too long for millet.

How Do I Reheat Millet Porridge?

This recipe makes a big batch of porridge. Store leftover porridge without milk added, in the fridge for up to a week. The porridge will be quite thick, so plan to add plenty of milk when you reheat it in the microwave. 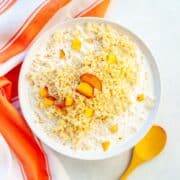 There are two ways to make Instant Pot millet, like a pilaf or like porridge. The pilaf method makes drier, fluffier millet and the porridge method makes millet that is softer and creamier.

How to Store Millet Porridge: I store leftover millet porridge in the refrigerator without any milk added because it keeps longer (up to a week). I add milk before reheating individual portions in the microwave.

Add More Flavor to Millet Pilaf: You can saute onion, garlic and spices before adding the millet, water and salt to the pressure cooker.