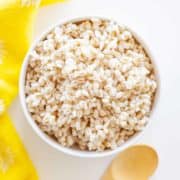 Barley is a healthy, high fiber grain with a chewy texture and mild, nutty flavor. Learn how to cook pearled or hulled barley using a stovetop or Instant Pot.

Once you learn how to cook barley, it becomes a pantry staple that can be turned into easy salads and grain bowls. It's also a healthy addition to soup and stew. My vegan Instant Pot Mushroom Barley soup is one of my favorite soups! Although I have to admit I also love Crockpot Beef & Barley Stew.

Quick Cooking:
Quick cooking barley cooks in just ten minutes, which is really convenient! This barley has been partially cooked and dried, so it’s considered the most processed type of barley.

Pearl Barley:
Pearl barley is the most common type of barley found in grocery stores. Pearl barley has been polished to remove the bran. For this reason, pearl barley isn’t considered a whole grain, although it still has a decent amount of fiber.

Pearl barley takes about 15 minutes to cook in a pressure cooker and 25 to 30 minutes on the stove top. Pearl barley has a slightly softer texture than hulled barley and absorbs more water as it cooks.

Hulled Barley:
Considered the most nutritious, hulled barley is a whole grain because it still has its bran and endosperm layer. Hulled barley also takes the longest to cook, 40 minutes or more on the stove top and around 25 minutes in a pressure cooker. Hulled barley has a firmer, more chewy texture. I don’t see hulled barley in stores as often - you might have to buy it online.

There are two water-to-barley ratios that can be used:

I prefer option #2, because you never have to worry about the barley sticking or burning to the pot. There's always enough water, and you simply drain off the excess water in a colander when the barley is cooked.

For this method, use a 4:1 ratio of water to barley (4 cups water/1 cup barley) when using an Instant Pot (pressure cooker) or cooking on the stovetop.

Pro Tip: Always drain off any remaining water immediately after the barley is cooked. Don't let the cooked barley sit in the extra water, or it will continue to absorb the water and get mushy.

Instant Pot
Cook pearl barley at high pressure for 15 minutes, with a 5 minute quick release (which means turning the steam release valve to "venting" 5 minutes after the cooking time has finished). This makes barley that is tender but not too soft.

Stove Top
Simmer pearl barley uncovered at a gentle simmer for at least 25 minutes, but some brands I’ve bought recommend an even longer cooking time.

Instant Pot Hulled Barley: I haven’t personally cooked hulled barley in my Instant Pot yet, however, you can check out this recipe for hulled barley, which recommends using the Multigrain function for 23 minutes with a natural release.

Stove Top: Simmer uncovered and start checking the texture at 40 minutes, but hulled barley can take an hour or more to cook

Pearled or hulled barley can be cooked directly in a soup or stew pot if you time it correctly. Be mindful of how long the barley takes to cook, and use that as a guide for your total soup or stew cooking time.

A little bit of barley can go a long way in soup and stew. I only add ½ to ⅔ cup to soup and stew. Also, keep in mind that the grain will absorb liquid as it cooks, resulting in less broth.

Pearl barley becomes softer in soup and stew and release starch into the broth. This gives the broth a thicker, silky texture. You'll notice this in the richness of my Instant Pot mushroom barley soup and in the thick broth of Crockpot Beef & Barley stew.

Hulled barley holds its shape better, if you prefer the grain to have a chewier, less soft texture in soup and stew.

If you don't want barley to affect the cooking time or texture of your soup or stew, you can cook it separately and then add it right before serving.

How much should I cook?

How do I store cooked barley?

Cooked barley can be kept in the refrigerator for at least 5 days.

Barley can also be stored in the freezer for several months. Freeze barley in an airtight freezer bag, making sure to remove as much air as possible from the bag. To defrost, place frozen barley in the refrigerator overnight.

How do I keep barley from getting too soft?

First, don't overcook it. But after it's been cooked, barley can get mushy if it sits in water. Drain excess water immediately. Lastly, warm barley piled in a bowl will continue soften because of the residual heat. It's best to cool the grain by spreading it out on a plate or sheet tray and cooling it quickly in the refrigerator.

How do I know if I bought pearled or hulled barley?

How to Cook Pearl Barley (Instant Pot and Stovetop) 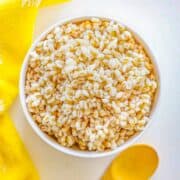 Barley is a healthy, high fiber grain with a chewy texture and mild, nutty flavor. Learn how to cook barley using a stovetop or Instant Pot and use it to make salads, side dishes, soup and stew.

This recipe is for Pearl barley. Hulled barley needs a longer cooking time.

Instant Pot water ratio and cooking times: I cook barley using a "pasta method" which means using more water and a slightly shorter cooking time. I like this method because you never have to worry about the barley absorbing all of the liquid and sticking to the pot. Simply drain off the excess water when the barley is done cooking.