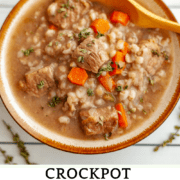 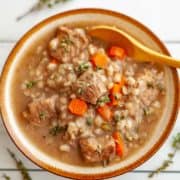 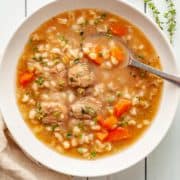 A hearty and comforting Crockpot beef and barley stew made with ease in your slow cooker. Just dump all the ingredients right in the slow cooker!

Crockpot beef and barley stew is a warm and cozy dinner, with hearty chunks of tender beef and spoonfuls of barley and carrots. The broth is thick and silky, with a rich gravy-like flavor.

With ease and convenience in mind, let's get right into the shortcuts that make this Crockpot beef and barley soup a winner for busy parents.

Do I Have to Sear Beef for Stew?

In an ideal world where I had plenty of time and energy, I'd recommend searing beef stew meat in a skillet before adding it to a slow cooker. Why? Because searing meat adds more flavor. People will tell you that you have to sear stew meat no matter what, but I hereby give you permission to skip this step if you want to.

I don't always have the time and energy to sear the meat and clean up the greasy mess afterwards. What I value most is convenience. I want to throw all the ingredients in the slow cooker at once with little fuss or muss. I need to get dinner going, and get on with my life.

That's why I don't sear the beef or saute the onion before these two ingredients go into the slow cooker.

But, I still want the meat to be flavorful. That's why I use an easy short-cut: Season stew meat the night before.

Do I Have to Saute the Onion and Carrot?

Most recipes suggest sautéing onion before adding it to the slow cooker. This is because 1.) onions don’t always fully cook in a slow cooker and 2.) Browned and caramelized onions have a sweeter and more delicious flavor.

If you have time to saute the onion, go for it. However, if time and energy are short, use my favorite shortcut: Microwave the chopped onion with olive oil to soften.

Can I Prep This the Night Before?

What Gives this Stew Broth a Thick and Silky Texture?

Beef stew is often thickened with cornstarch or flour. Neither are necessary in this recipe.

In this recipe, slow cooked barley releases starch into the broth that naturally thickens the stew. The longer the barley is cooked in the stew, the thicker and silkier the broth will be.

Can I Use Farro Instead of Barley?

Yes, this stew can be made with farro, but you'll have to adjust the cooking time. Farro cooks a little bit faster than barley.

Pearled farro usually cooks in 2 to 3 hours on LOW in a slow cooker and whole grain farro needs about 4 hours on LOW.

You can cook the farro for a longer amount of time in the slow cooker, and the texture will become increasingly softer.

If you like farro, you can also try Instant Pot Farro Soup with Lemon-Ginger Broth.

Is Pearl Barley a Whole Grain?

No, pearl barley is not a whole grain because it has been polished, or “pearled” to remove most of the outer bran layer along with the hull. According the the Whole Grains Council, "it’s much healthier than other reﬁned grains because (a) some of the bran may still be present and (b) the ﬁber in barley is distributed throughout the kernel, and not just in the outer bran layer."

Hulled barley is minimally processed and considered a whole grain. Hulled barley is a little harder to find in stores (but fairly easy to buy online). It has a longer cooking time than pearled barley.

How Much Beef Should I Add?

It's up to you. I often make this stew using just 1 pound of stew meat. It makes the meal less heavy and more affordable, but is still really satisfying. If you're trying to eat less meat but love the rich flavor of beef stew, you could even add slightly less than a pound of meat.

If you like a heartier stew, then add up to 2 pounds of stew meat.

When to Add Barley to the Stew

I add barley at the very beginning with all the other ingredients. This is for convenience, but also because I like the creamy texture of barley stew with a long, slow cooking time.

Barley doesn't need 7 to 8 hours to fully cook in a slow cooker. However, as the barley slowly cooks it takes on a softer, creamier texture and also releases starch into the broth, giving the stew a thick, gravy-like texture.

If you prefer barley that is more firm and chewy, then wait to add it halfway through the cooking time (so the barley only cooks for 2.5 to 3 hours).

I usually cook barley in my Instant Pot. However, I also love adding barley to slow cooker soups.

Is There More Than One Type of Barley?

There are 3 types of barley sold in stores: Hulled, Pearled and quick-cooking.

Pearl barley is the most common type of barley sold in grocery stores. If a package doesn't specify the type of barley, it's usually pearled. Most recipes (like this one) call for pearled barley because it's the easiest to find and has a shorter cooking time than hulled barley.

Hulled barley has a longer cooking time and retains its shape and chewy texture better, becoming less soft as it cooks.

Quick-cooking barley is the most processed type of barley and cooks in about 10 minutes (in boiling water or broth).

What Type of Barley Should I Add to Stew?

I use pearl barley in this stew because it's always at my grocery store. I haven't tried this recipe with hulled barley yet, but I think it would work just fine. The long cooking time should work well with hulled barley, and the barley might hold its shape better than pearled barley.

If you only have quick-cooking barley on hand, then I would cook the quick barley in a separate pot, then simply stir it into your stew after it's finished.

How Long Does Pearl Barley Take to Cook in a Crockpot?

Pearl Barley is fully cooked in a Crockpot after approximately 3 hours on LOW or 1 hour on HIGH. Cooking times vary in different slow cookers, but this is a good estimate.

You can cook the barley longer if you want, it will just make the texture softer.

When to Add Pearl Barley to Slow Cooker Stew?

Exactly when you decided to add pearl barley to your slow cooker stew is a matter of personal preference.

If pearl barley is added at the very beginning of the cooking time with the rest of the ingredients and cooks longer, the texture becomes soft and creamy with just a slightly chewy texture. The barley also releases more starch into the stew broth, giving the broth a thicker, silkier texture.

How Much Liquid Does Slow Cooker Barley Need?

For every 1 cup of dried barley, you should add at least 4 cups of water or broth. 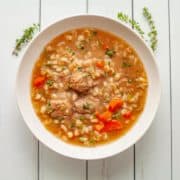 A hearty and comforting Crockpot beef and barley stew made with ease in your slow cooker. Just dump all the ingredients right into the slow cooker!

*Cooking Note - For the most flavor, season your beef stew meat the night before. You can actually prep this entire recipe the night before - For more details, read the blog post above.

*You can use all water or all broth, or a combination. If using only water, you'll need to add salt after the stew is cooked to boost the flavor.

Pre-Season the Beef Stew Meat: The night before, season the stew meat with salt, pepper, garlic powder and seasoning salt. Add the garlic cloves and put the meat and garlic in the refrigerator overnight.

If you forget to season the meat the night before, just season it at the beginning of this recipe, before adding any other ingredients to the slow cooker.

When cooked for the full amount of time, the barley becomes vey soft and creamy. It also releases starch into the water making this a thick, silky broth. If you prefer barley that is more firm and chewy, then wait to add it halfway through the cooking time.