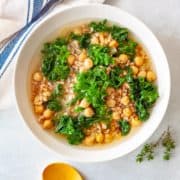 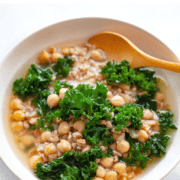 Instant Pot farro soup is a healthy, comforting meal with a nourishing kick of flavor from lemon and ginger. The lemon-ginger broth is so good!

On those nights when you crave something both healthy and comforting, this Instant Pot farro soup will do your body right.

It's made from a handful of wholesome ingredients that come together quickly and easily in your Instant Pot.

What I love most about this soup is the broth. I could drink a bowl of only the lemon-ginger broth and be happy! Clear and bright with just the right amount of zing from ginger, I'm already thinking about ways to use this lemon-ginger broth in more soup recipes.

I add just enough ginger to this soup to make it gingery without offending my kids. But honestly, if I was the only person eating the soup I'd add more.

Psst....if you like ginger with chickpeas and coconut milk, you should try my chickpea stew with chicken and potatoes (can also be made vegetarian).

You can make substitutions to this soup depending on what you have in your kitchen.

Farro is a grain with a mild flavor and hearty, slightly chewy texture. Learn how to cook farro in you Instant Pot so you can add it to salads and make batches for meal prep.

The most common type of farro sold in stores is pearled or semi-pearled, which is what you'll use for this recipe.

Farro is considered an ancient grain, which means it hasn't been modified or crossbred extensively.

Farro is high in protein and fiber. It is also rich in magnesium, zinc and B vitamins.

Why I Love Frozen Kale

I always have a bag of frozen chopped kale (or spinach) in my freezer. It keeps for months (unlike fresh greens) and is a very easy to way to add healthy greens to your meal.

In this recipe, you add a cup of frozen kale right before serving the soup. It instantly cooks in the hot broth and adds color, nutrients and flavor to the soup.

Besides soup, you can add frozen kale to chili recipes, stew, pasta sauce and cooked beans. For each, stir in the frozen kale at the very end of the cooking time.

Frozen kale sautes very quickly, making it an easy addition to any recipe you're sauteing in a pan. I also like to add kale to my Instant Pot Turmeric Coconut Rice.

IF YOU TRY THIS RECIPE, LET ME KNOW HOW IT TURNED OUT. PLEASE COMMENT BELOW AND LEAVE SOME STARS — THANKS! I APPRECIATE YOUR FEEDBACK!

My Instant Pot farro soup is a healthy, comforting soup with a nourishing kick of flavor from lemon and ginger. The lemon-ginger broth is so good!

This recipe can also be made with barley. Simply increase the cooking time to 15 minutes.

You can add more, or less, ginger to the soup depending on how much you like ginger. If you want to add more ginger to individual bowls, use a microplane zester to grate fresh ginger into your own bowl of soup.

Farro absorbs liquid after it is cooked, so leftover soup eaten the next day will be thicker and less brothy.

All of my Instant Pot recipes are made in a 6-quart instant pot.