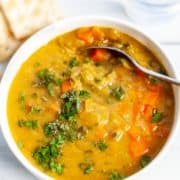 Make it vegetarian or with ham, either way this a classic and comforting recipe for Crockpot Split Pea Soup. This dinner couldn't be easier when it's made in a slow cooker.

At the end of a long day, when your family is hungry and tired, someone will inevitably ask, "what's for dinner?"

It there anything better than having the answer to that question come in the form of a delicious aroma that greets you when you open the front door?

Crockpot split pea soup is a simple classic. It's a thick and hearty soup with a naturally creamy texture, and can be made vegetarian or with salty, smoky ham.

About 10 minutes of prep (depending on how fast you chop an onion) is all it takes and this crockpot split pea soup is good to go.

I really love the smoky flavor of ham as a contrast to the naturally sweet flavor of green split peas. There are several ways to add pork to soup.

Ham hocks: Ham hocks are found in the meat section at many grocery stores. They keep well in the freezer if you want to stock up. A ham hock is a roundish piece of bone with skin, fat, collagen and a little meat. Most importantly, ham hocks are smoked and give any type of soup a rich smoky, meaty flavor.

Leftover Ham Bone: If you've recently served a spiral ham, save the bone to add flavor to split pea soup. If the bone still has meat on it, all the better!

Leftover Ham: You can chop up leftover ham or have your grocery store deli slice a thick piece of ham that you can cut into small cubes. I usually add some ham while the soup cooks and save some to add as garnish after its cooked.

Bacon: I only add cooked bacon to this soup as a garnish after the soup is ready. I find that cooked bacon doesn't add much flavor to the soup while it cooks, and adding raw bacon to a crockpot recipe results in flabby, fatty strips of bacon that don't enhance the soup.

An easy way to cook bacon is in the oven. Line 2 rimmed sheet pans with foil or parchment for easier cleanup. Spread out strips of bacon. Put the bacon in the oven and turn the heat to 400 F (I don't bother pre-heating). Cook the bacon for 15 to 25 minutes, until it reaches your desired crispiness.

This soup can be a hearty vegetarian (or vegan) meal. A pinch of paprika, fresh parsley and thyme and a bay leaf add flavor. I also like a teaspoon of liquid smoke to replace the savory flavor of ham.

But this soup really shines as a vegetarian meal when you add a few garnishes after the soup is cooked - read on for ideas!

How to Garnish Split Pea Soup

Let's be honest, this isn't the most beautiful soup you'll ever serve. A few garnishes really add something visually to each bowl of soup, and the flavor gets even better.

What are Split Peas?

Split peas are peas that have been dried and split in half, so that they cook faster.

What is the Difference Between Yellow Split Peas and Green Split Peas?

Yellow peas, which are meant to be dried, are a different variety than green peas, which can be eaten fresh or dried.

The flavor of dried split green peas and yellow peas is very similar and a matter of personal preference. Other than a slight flavor difference, yellow and green split peas are very similar.

Can I Use Yellow Split Peas in this Recipe?

Yes, you could use yellow split peas in place of green split peas to make split pea soup.

Peas and lentils are different varieties of legumes.

What Are Split Peas Good For?

When cooked, split peas break down quickly and don't hold their shape so they are mainly used in soup and stew recipes.

Make it vegetarian or with ham, either way this a classic and comforting recipe for Crockpot Split Pea Soup. This dinner couldn't be easier when it's made in a slow cooker.

Store bought broth has quite a bit of salt, so I prefer using low sodium broth for this soup especially if I’m adding ham of any kind. You can then adjust the salt level after the soup is cooked.

Pea soup can also be made using only water. Just add a generous amount of salt after the soup is cooked to up the flavor.

This soup keeps well in the refrigerator for 4 or 5 days. When reheating you’ll probably need to add more liquid, as it gets very thick over time. You can also freeze split pea soup.

Does this recipe make you hungry?
SUBSCRIBE
to the Kitchen Skip newsletter
for helpful tips and easy recipes