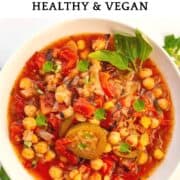 This recipe for vegetarian stew is an easy, healthy slow cooker stew made from bell peppers, zucchini, chickpeas, fire roasted tomatoes and a pinch of Italian flavor.

If you've been looking for an easy, no-fuss recipe for vegetarian stew, this is it! Both light and flavorful, this blend of chickpeas and veggies is incredibly satisfying.

Fire-roasted tomatoes add subtle smokiness. A pinch of oregano and a drizzle of balsamic vinegar add Italian flavor (sometimes I add basil, too).

Why this recipe works

Red Onion: For this recipe, there's no need to saute the onion before adding it to the slow cooker.
Substitute: Yellow or white onion

Garlic: I add 4 cloves, thinly sliced or finely chopped. If you're in a hurry, just peel the cloves and smash them with your palm.

Zucchini: You can thinly slice the zucchini into rounds, or cut into smaller bite-sized chunks.
Substitute: Yellow or crookneck squash.

One can garbanzo beans, with liquid: Using the whole can (beans + liquid) adds flavor and broth to the stew.
Substitute: White beans or butter beans. However, the white beans won't hold their shape quite as well and some cans of white beans have less broth than garbanzo beans do.

One 14.5 ounce can diced fire roasted tomatoes: Fire-roasted tomatoes have more flavor, adding a subtle smokiness to the stew.
Substitute: Regular diced tomatoes or crushed tomatoes, if you don't like chunks of tomato in the stew.

Water: Add just ½ cup for this stew, since the veggies also release water as they cook. For more broth add 1 cup water or more.

Olive oil: There's no need to saute the vegetables before adding them to the slow cooker, but I still like adding olive oil to this stew as a separate ingredient. It gives the stew body and richness.
Substitute: Butter, or skip adding oil entirely. You could also add a parmesan cheese rind to the stew as it cooks for richness.

Salt: Remember, the chickpea liquid from the can of beans will also add saltiness. So I add just a ½ teaspoon more, then more to taste when the stew is ready.

Chickpeas are a unique bean with a mild flavor and firm texture. For these reasons, it's hard to find an equal substitute for chickpeas.

White beans are the best substitute for chickpeas, because of their mild flavor. However, the texture of white beans tends to be softer than chickpeas. You can use your favorite variety of white bean in soups and stews, and even make white bean hummus.

If you're looking for a variety of canned white bean that holds it shape and texture even after being cooked, then try butter beans. You can substitute butter beans in this and other stew recipes. Or try Skillet Butter beans with Pizza Cheese and Spinach - a delicious vegetarian dinner!

How to serve veggie stew

I'm perfectly happy eating this veggie stew without any extras, but it truly is extra-delicious when served with one or more of these sides.

Can I Use Dried Chickpeas?

Canned chickpeas work better in this recipe for vegetarian stew, unless you're okay with really soft vegetables. Even after being soaked overnight, garbanzo beans tend to take longer to cook than zucchini and bell peppers. It's hard to get the timing right so that both the dried chickpeas and vegetables cook evenly and at the same rate.

Also, the acidity in tomatoes and vinegar can prevent dried beans from softening.

If you'd like to learn more about cooking dried garbanzo beans, read my helpful How to Cook Garbanzo Beans recipe.

What is Chickpea Brine?

Chickpea brine, also called aquafaba, is the liquid that the beans are cooked in. It can also refer to the liquid in a can of chickpeas.

Chickpea brine can also refer to the combination of water and salt that dried chickpeas are soaked in before being cooked.

Yes, chickpeas and garbanzo beans are exactly the same thing.

Can I Freeze Vegetarian Stew?

Sure, just package the stew in a freezer bag or freezer-safe container. Sometimes after being frozen, the vegetables will have a softer texture when reheated. You might also need to add more water or broth when reheating the stew.

Can I Leave This Stew in the Slow Cooker for 8 hours?

A full day (8 hours) in the slow cooker will turn the vegetables very soft. I prefer this stew when it's been cooked 4 to 6 hours on low. 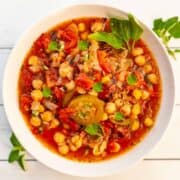 An easy, healthy slow cooker vegetarian stew made from bell pepper, zucchini, chickpeas and fire roasted tomatoes. I like serving this stew with croutons or crusty bread.

Thinly sliced vegetables (½-inch thick or less) will cook faster and have a softer texture after 4 to 6 hours in the slow cooker. If you prefer vegetables that aren't overly soft, then slice the bell pepper and zucchini wider than ½-inch thick. Keep in mind that this will make a chunkier stew that might require a fork to eat!

I only add ½ cup water to this stew because the vegetables release liquid while they cook and the liquid from the can of chickpeas adds to the broth. You'll end up with a brothy stew. If you want soup instead of stew, you'll need to add another cup or so of water, and adjust the salt after it cooks.