Stuffing just might be my favorite dish on the Thanksgiving table. Honestly, I don't know why I wait until Thanksgiving to make stuffing, since stuffing is a side dish I'd happily eat any time of year!

The fluffy, buttery texture of brioche makes stuffing that is rich in the middle and delicately crispy around the edges. The slightly sweet flavor of brioche is just so perfect with the savory additions of leeks, celery, and seasoning.

Brioche: Made with butter and eggs, brioche is both rich and fluffy with a slightly sweet flavor. It really makes this stuffing special. If needed, you can substitute challah or white sandwich bread.

Leeks: Leeks have a milder, more delicate flavor than regular onions. They lean towards sweet instead of sharp, which is why leeks are so good in this stuffing. If necessary, you can substitute a sweet onion.

Celery: It's hard to pinpoint what celery adds to stuffing, but I never make stuffing without it!

Olive oil and butter: Olive oil is used to bake the brioche into crunchy croutons and butter is used to saute the veggies. I suppose you could use olive oil for both for a slightly less rich stuffing.

Thyme: I use fresh thyme, which has more flavor than dried. You could substitute minced fresh sage.

Poultry seasoning: This seasoning is like Thanksgiving in a bottle! It has all the quintessential flavors of stuffing: dried thyme, sage, marjoram, rosemary, black pepper and nutmeg. If you can't find poultry seasoning (sold at most grocery stores) you can use dried sage and/or rosemary.

Step 1: Toast torn pieces of seasoned brioche in the oven for about 15 minutes.

Step 6: Spread stuffing out in a baking dish.

Final Step: Bake the brioche stuffing for 25 minutes covered in foil. Bake another 25 minutes without foil until nicely browned on top.

How to dry bread for stuffing

The reason that dry, toasted bread is used for stuffing is that it absorbs all the moisture in stuffing but doesn't get soggy.

Many stuffing recipes dry bread out on the counter overnight before starting a stuffing recipe. Although this takes longer, it can be more convenient because it's a hands-off method. However, it doesn't get the bread quite as dry as toasting in the oven does.

I recommend lightly toasting torn pieces of bread in the oven. You can do this the day before you make the stuffing, if you want to get a head start on Thanksgiving.

Seriouseats.com agrees with me in the article, "How to Toast bread for Faster, More Flavorful Thanksgiving Stuffing."

To dry out the bread, spread the bite-sized pieces of brioche out on baking sheets. Toast at a low heat and keep an eye on the bread so it doesn't burn. This is especially important with brioche, because it toasts faster than other types of bread.

Usually, the bread is toasted plain. However, for this recipe the brioche is turned into seasoned croutons by tossing the brioche in olive oil and poultry seasoning before toasting it.

*the information below about stuffing and food safety can be found on the USDA.gov website under "Tips for Handling Stuffing with Care"

Can I mix the stuffing ingredients together ahead of time and cook it later?

Can I reheat cooked stuffing?

Yes. I usually reheat individual servings in the microwave. A pan of cooked stuffing can be reheated in the oven, covered with foil, at 350 degrees until warmed (20 to 30 minutes).

If the leftover stuffing seems dry before you reheat it, you can drizzle ¼ cup of broth over the stuffing before putting it in the oven.

For food safety, stuffing should be reheated to 165 degrees (use a digital thermometer to test the middle of the pan)

How far ahead can I bake this stuffing?

Baked stuffing should be eaten within 2 hours if kept at room temperature. Or, it can be baked up to 24 hours ahead of time, cooled and kept in the refrigerator, then reheated before serving.

To reheat, tightly cover the stuffing with foil and put it in a 350 degree oven. You can take the foil off for the last 10 minutes to crisp up the top, just keep an eye on the stuffing so it doesn't burn. Brioche burns more easily than other types of bread.

For food safety, the stuffing should reach a temperature of 165 degrees (use a digital thermometer to test the middle of the pan).

Cooked stuffing, kept in the refrigerator, should be eaten within 3 days.

Can I freeze cooked stuffing?

Can I stuff a turkey with this stuffing?

I haven't tried cooking this stuffing inside of a turkey. If you do, loosely fill the turkey cavity with stuffing - don't pack it in. Put the stuffing in the turkey right before the turkey goes into the oven. The oven should be set at a minimum of 325 degrees, according to the USDA. The bird and stuffing must both reach a safe temperature of 165 degrees before they are safe to eat.

What is the best bread for stuffing?

Brioche is a great choice, because of its rich flavor and texture. However, the best bread for stuffing depends on the type of flavor you want. Challah, brioche and cornbread give stuffing a slightly sweet flavor. Sourdough bread gives stuffing a tangy flavor. Regular white sandwich bread, French or Country Bread have a more neutral flavor and let the other ingredients in the stuffing stand out. 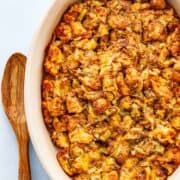 Buttery brioche stuffing is a savory vegetarian stuffing for the Thanksgiving and a delicious side dish any time of year. Serve it with vegetarian meals or with turkey, roasted chicken or sausage on the side.

Leftovers: Leftover, refrigerated stuffing should be eaten within 3 days.

How to Clean and Slice Leeks: Follow this easy How to Clean Leeks tutorial from Jessica Gavin