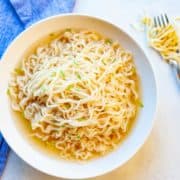 An incredibly quick and easy soup that combines Instant Pot Pho broth with ramen noodles. No prep work, 7 ingredients and just 8 minutes in your pressure cooker!

Is this pho with ramen noodles?

Or ramen with pho broth?

To be honest, I'm not sure. But one thing I do know is that my kids are crazy about this soup right now.

They love the Vietnamese-inspired broth and slurping the long ramen noodles out of their bowl. I love the fragrant, flavorful broth too AND I love that this is an incredibly quick and easy dinner.

When I say "quick and easy" I'm not exaggerating. No prep work! Just combine 7 ingredients in your pressure cooker, cook on high pressure for 8 minutes, then add noodles.

Vietnamese Pho is a richly flavorful soup that's usually the result of a longer ingredient list - including beef bones or a whole chicken - and long, slow simmering on the stove. It's served with rice noodles and often thinly sliced meat or shredded chicken, bean sprouts and fresh herbs.

Andrea Nguyen writes about the History of Pho and has both a pho cookbook and several authentic pho recipes on her blog, Viet World Kitchen.

Let's be clear - this recipe here is not authentic pho. Instead, it's a quick and easy shortcut for busy parents who need to start dinner at 6:05pm and have it on the table by 6:35.

Even so, this quick and easy pho broth is really satisfying. It brings a welcome change of flavors to the dinner table and I think your family is going to love it too!

Ramen and Other Noodles

Ramen: My kids love long, squiggly ramen noodles. So even though Ramen is usually found in Japanese style ramen soup, we've been adding it to this pho broth.

For this recipe, I use two packages of either Top Ramen or Maruchan Ramen Soup (each about $0.35 cents). I throw away the seasoning packs that comes with the dry noodles, or I stash them in my pantry.

Rice Noodles: Pho is traditionally served with rice noodles. The noodles are called banh pho, or just look for packages of pad Thai noodles. Cook the rice noodles according to the package instructions, then add to the soup right before serving.

Capellini or Spaghetti Noodles: In a pinch, you can also use regular pasta in this soup. Quick-cooking capellini can be boiled directly in the broth (after the 8 minute cooking time) but spaghetti should be boiled separately then added to the soup.

If you have more time, you can bump up the broth flavor and/or add more ingredients to your soup.

Here's how you do it:

If noodles aren't enough, you can add different types of protein to the soup. Add the protein after you've already cooked the broth, and simmer it for a few minutes with the noodles.

What to Serve with this Soup

This recipe makes 4 full bowls of soup , but my hungry family sometimes need more for dinner.

An incredibly quick and easy soup that combines Instant Pot Pho broth with ramen noodles. No prep work, 7 ingredients and just 8 minutes in your pressure cooker!

*I buy Top Ramen or Maruchan. See blog post above for other noodle options.

Fish sauce is optional, but it does add good flavor to the soup. If you're vegetarian, just skip it.

Fish sauce can also be added to individual soup bowls after the soup is cooked, for those who want it.

Does this recipe make you hungry? Subscribe to the Kitchen Skip newsletter for more easy dinner recipes.

Hi! I'm Jenny - Mama of two, optimist, avid reader, lover of buttered toast and steaming hot mugs of coffee. I share easy dinner recipes for busy parents who want to eat well without spending too much time in the kitchen. More About Jenny →