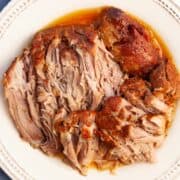 This recipe for cider-braised pork is an exercise in slowing down. Sometimes, it's rather nice spending a long afternoon at home with something in the oven and the aroma of dinner filling the house, don't you think?

This pork is flavored with a blend of flavorful and aromatic ingredients. The braising liquid - a combination of apple cider and soy sauce - reduces into a deeply flavorful sauce for the meat. You'll love the savory and slightly sweet flavor of this pork!

Just because cider braised pork needs time, doesn't mean it also requires a lot of work. Making braised pork is surprisingly easy and straight-forward. Best of all, a large cut of meat can usually provide more than one meal during the week.

Buy a 4 to 5 pound pork butt or pork shoulder, which feeds anywhere from 5 to 8 people, depending on how many sides you're serving with the meal (and how big the appetites are).

Season the Meat: Rub the meat all over with a paste of brown sugar, Dijon mustard, smoked paprika, fennel seeds, salt and pepper. Ideally, season the pork the night before so the flavor has time to soak in.

Add Apple Juice or Cider: Add the apple cider/juice to the roasting dish, to prevent the spice rub from burning to the sides while the meat browns at a high temp.

Start at a High Temperature: Heat the oven to 475 F. Cook the pork uncovered for 15 to 20 minutes to brown and crisp up the top.

Go Low and Slow: Add soy sauce. Cover the Dutch oven with a tight lid. Reduce the temperature to 300 F and braise the pork 4 to 5 hours, or as long as it takes for the meat to become tender and easily pull apart with a fork.

Shred the meat: The meat should fall apart easily with forks or you can slice it. You can shred and eat the pork immediately, but it tastes even better if it's allowed to cool in the braising liquid first, ideally for several hours or overnight. Also, letting the entire roasting vessel chill out in the fridge congeals the fat so it's easier to skim off.

Tip: I like to cook pork shoulder in a Dutch oven. Dutch ovens are heavy cooking vessels with tight lids, perfect for braising meat. A Dutch oven holds heat well, helping food cook steadily and evenly. I own two Dutch ovens, from Lodge and Le Creuset.

The best braising liquid for pork depends on what type of flavor you want. This recipe for cider-braised pork uses apple cider/juice and soy sauce as a braising liquid. It's a sweet-salty combination that creates a rich and flavorful sauce.

Plan to add 2 to 3 cups of braising liquid, to rise halfway up the meat. Pork can be braised in a variety of liquids, including:

Wine: Use white or red. For the best flavor, combine wine with broth.

Lime juice or orange juice: Add as an additional flavor along with another braising liquid. Try 12 ounces beer with 1 cup juice.

Canned tomatoes: A 14-ounce can of crushed or diced tomatoes can be combined with wine and/or broth

Tip: Fat from the meat will drip into the braising liquid as it cooks. The braising liquid turns into a flavorful sauce for the meat. If you want to remove some of the oil immediately before serving, then a fat separator is a handy tool. Or, let the meat and braising liquid chill out in the refrigerator overnight. The fat will congeal on top and is easy to scrape off before reheating the dish.

Once you've spent an afternoon braising a big cut of meat, your work is done and the meals you serve with the leftover meat should be fairly simple. I try to get at least 2 or 3 meals out of one pork shoulder.

Roasted veg: Roast a few sheet-pans of your favorite vegetables to serve on the side

Pasta: Toss with buttered noodles, or simmer the meat briefly in red sauce.

Tacos: Pile the shredded meat in a tortilla with your favorite toppings, like beans and shredded cabbage. You can also add the meat to easy and fast oven-baked tacos.

Sandwiches: Pile shredded pork on a hamburger bun or stuff it into pita bread

Pork shoulder and pork butt are very similar cuts of meat and can be used interchangeably. However, I see pork butt recommended most often in recipes because it typically has more fat marbled throughout the meat, which means more flavor and tenderness.

Both the pork butt and pork shoulder come from the same part of the pig (the upper and lower shoulder). Both are tough and fatty and are best cooked at a low temperature for a long time. Both are sold either boneless and bone-in - which you get often depends on where you shop.

Both cuts should have fat across the top, which is good for flavoring the meat as it cooks. Sometimes pork shoulder also has thin layer of skin attached to the fat. If the skin is attached, then it's best to brown the roast in a saute pan to get the skin crispy before putting the roast in the oven.

I usually buy apple juice for this recipe because it's easier to find in stores than apple cider. The two are very similar, and for this recipe it doesn't matter which is used.

Hard cider is apple cider that has been fermented into alcohol. You don't need to spend extra money on hard cider for this recipe.

Should I buy bone-in or boneless shoulder/butt?

Either is fine for this recipe.

How long does it take to braise a large cut of meat?

Large cuts of meat usually take a minimum of 4 to 5 hours to become tender, if the oven temp is around 300 F. If the meat weighs more than 5 pounds, it will take longer to braise (closer to 8 hours).

How much braising liquid?

Pour about 2 to 3 cups of braising liquid into the pot or Dutch oven. It should be enough liquid to rise halfway up the meat.

What is a safe temperature for cooked pork?

The USDA recommends that cooked pork reaches an internal temp of 145 F.

How do I freeze cooked shoulder/butt?

Shred the cooked meat, then combine it with some of the braising liquid in a Ziploc bag or freezer safe container. You can freeze the meat for 3 to 6 months.

To defrost, put the frozen meat in the refrigerator overnight. You can then warm it in a saute pan on the stove or in the oven at 350 F, covered with foil. Add a little water to keep the meat moist while reheating.

How long will the cooked meat stay fresh?

The cooked meat will stay fresh for 3 to 5 days in the refrigerator.

How long should a dry rub be on the raw pork shoulder?

The longer, the better. Rubbing the pork with salt and spices the night before gives the meat time to absorb more flavor. That being said, I've also made this recipe by rubbing the meat right before it goes in the oven, and it's still delicious.

Can pork be slow roasted at an even lower temperature than 300 F?

Yes. Some recipes cook the pork very low and slow, at around 200 F for 8 to 10 hours. This method is often used to cook the pork overnight while you sleep (so you can wake up to a delicious meal!)

What is a fat cap? Should I cut the heavy layer of white fat off?

A fat cap is a thick layer of white fat the covers one side of the roast. It's usually between ½ to 1 inch thick. A fat cap provides flavor and keeps the meat moist while it roasts. I always cook the roast with the fat cap on top, so that the fat runs over the meat as it cooks.

Can I make this in a slow cooker?

Yes. Rub the meat with the spice rub, then add the apple juice and soy sauce to the slow cooker. Cook on low for 8 to 10 hours. You can crisp up the cooked meat by shredding it and placing it briefly under the broiler. 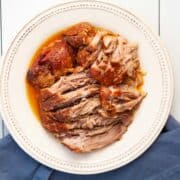 Cider-braised pork is braised in apple cider, soy sauce and spices, creating tender, flavorful meat and a rich sauce that is delicious spooned over shredded pork.

Note: If possible, season the pork the night before you cook it.

If possible, rub the brown sugar, mustard and seasoning mix on the pork the night before you cook it. This gives the seasoning, and especially the salt, time to penetrate and flavor the meat more fully. It's not absolutely necessary, but will make the pork more flavorful.

This pork will keep for about 5 days in the refrigerator. You can freeze the pork by shredding the meat and mixing it with some of the braising liquid in a Ziploc freezer bag. To defrost, put the pork in the refrigerator overnight then warm in a saute pan with a little water on the stove or in the oven (covered with foil)