Pan seared shrimp has fantastic flavor and texture, thanks to a cooking method that browns the exterior of the shrimp without overcooking it.

If you've never pan seared shrimp, you're in for a treat! It's a quick, easy way to cook shrimp and give it amazing flavor.

The definition of pan searing is searing food over high heat to create a flavorful, nicely browned crust. Pan searing doesn’t necessarily cook the food all of the way through, it just browns the outside (like when you pan sear a roast before putting it in the oven).

However, shrimp cook really fast! Shrimp cook so quickly that pan searing means both browning the outside and cooking the shrimp at the same time.

It only takes a few minutes to pan sear shrimp, so stay close to the stove!

You only need two ingredients to make this recipe: raw shrimp and either butter or oil.

Step 2: Heat butter or oil in a wide skillet.

Step 3: Pan sear HALF of the shrimp for just under 2 minutes. Don't crowd the pan and don't move the shrimp around, let them sear!

Step 4: Flip the shrimp over and lift the skillet off direct heat. Let the shrimp cook for another minute, or slightly less, in the residual heat of the skillet.

Step 5: Transfer the seared shrimp to a serving platter. Cook the second batch of shrimp following the same steps. Serve hot or cold, both are delicious!

Cook the shrimp in batches: Don't add more than ½ pound of shrimp to the skillet at once. The shrimp should be spaced out in the skillet while cooking. This insures that moisture (the enemy of browning) will evaporate quickly and the shrimp won't sit in their own juices while cooking.

Use a wide skillet: A 12-inch skillet allows plenty of room to evenly space out the shrimp in a single layer. Use a non-stick skillet to prevent the shrimp from sticking, which helps keep all of the yummy browned flavor on the shrimp.

Add enough butter or oil: Don't skimp! Without enough oil or butter in the skillet, the shrimp won't brown properly and won't have as much flavor.

Don't Move the Shrimp: Moving food around in a skillet prevents it from browning, whether it's shrimp, chicken or tofu. Just leave the shrimp alone and resist the urge to mix with a spatula. After 2 minutes, flip the the shrimp over, then leave them alone again to brown on the other side.

Error on the side of less cooking, not more: Shrimp cook really quickly. A total of slightly less than 3 minutes of total cooking time is about right. You need that amount of time to get a brown sear on the outside, but don't leave the shrimp in the skillet longer than a total of 3 minutes or they will overcook.

How to Serve Pan Seared Shrimp

These shrimp are flavorful enough to serve as a main course next to rice and a simple vegetable. However, you can also make shrimp tacos, pasta, and more with pan seared shrimp.

However, you can also add herbs, spices, garlic or citrus to give the shrimp more distinctive flavor.

*Note: Before seasoning with salt, check the ingredient list on the bag of shrimp. Many brands of frozen shrimp have salt added.

Use ½ to 1 teaspoon of a spice or seasoning per pound of shrimp. Pat the shrimp dry and then season it before adding the shrimp to the hot skillet. If adding lemon or lime juice, wait until the shrimp are completely cooked then finish with a squeeze of citrus.

Seasonings that go well with shrimp include:

For detailed instructions about the best way to reheat shrimp, check out my recipe How to Reheat Shrimp.

Can frozen shrimp be used for this recipe?

Nope. The shrimp need to be defrosted.

The best way to defrost shrimp is in the refrigerator overnight. If absolutely necessary, you can defrost shrimp using a faster method by placing a bag of frozen shrimp in a large bowl of cold water for about 20 minutes.

Can shell-on shrimp be used?

If you'd like to pan sear shell-on shrimp, make sure to add more oil to the skillet (about ¼ cup). This prevents the shells from sticking to the pan. You'll also need to cook the shrimp for closer to 4 to 6 minutes. If you'd like a specific recipe, try Shell-On Shrimp with Rosemary, Garlic and Chile on Food52.com.

Is it best to buy fresh or frozen shrimp at the grocery store?

Shrimp are almost always frozen after being caught, so even if you’re buying “fresh” shrimp at a fish counter it’s likely they’ve already been frozen and defrosted. For this reason, buying frozen shrimp makes more sense, unless you know you will be cooking the shrimp the same day you buy them.

How do I know what size of shrimp I'm buying?

Shrimp, especially frozen packaged shrimp, is labeled according to how many shrimp are in a pound. The smaller the size of the shrimp, the more of them will be in one pound. For example, if "36-45" is on the package, it means there will be about 36 to 45 shrimp in a pound. If "16-20" is on the package, it means the shrimp are larger and there will only be about 16 to 20 per pound.

How do I know when shrimp are overcooked?

Raw shrimp has a translucent gray color that will turn orange/pink as the shrimp cooks. Cooked shrimp is opaque and no longer has a grayish color. The shape of the cooked shrimp will be curved, but it shouldn't be super firm and tight. Overcooked shrimp curl into a tight "C' shape. 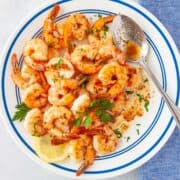 Pan seared shrimp has fantastic flavor and texture, thanks to a cooking method that browns the exterior of the shrimp without overcooking it.

This shrimp is great hot or cold and can be a main course with rice or buttered noodles and a veggie on the side. Or, you can add these shrimp to tacos, salads, pasta dishes and more.

The type of fat used to sear the shrimp will affect the flavor. Any type of fat is fine, just choose what sounds good to you. Do you want buttery shrimp? Or a lighter coating of extra virgin olive oil? Vegetable oil won’t add any detectable flavor. Coconut oil, on the other hand, will.

See the section "Seasoning Suggestions" in the blog post above for suggestions of herbs and spices to add.

Use ½ to 1 teaspoon of a spice or seasoning per pound of shrimp. Pat the shrimp dry and then season before adding to the hot skillet.

Garlic or ginger can be added to the skillet after the shrimp have already cooked for 2 minutes and are flipped over. If you added it sooner than that, the garlic might burn.

If adding lemon or lime juice, wait until the shrimp are completely cooked then toss with a squeeze of citrus.

Fresh herbs can be added before or after the shrimp are cooked.

Before seasoning with salt, check the ingredient list on the bag of shrimp. Many brands of frozen shrimp have salt added.

Storage and Leftovers: Cooked shrimp should be kept in the refrigerator and eaten within 2 to 3 days. If the shrimp has gone bad it will have a strong fishy odor.