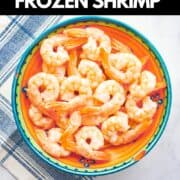 Use your Instant Pot to steam frozen raw shrimp in minutes! Instant Pot shrimp can be served as a quick appetizer or be used in any recipe that calls for cooked shrimp.

Shrimp is a protein that cooks quickly and can be turned into a fast weeknight dinner.

Unless, of course, that shrimp is still frozen in your freezer.

If you have an Instant Pot, this is no longer a problem! Instead of defrosting frozen raw shrimp overnight in the refrigerator, you can just steam it in your Instant Pot.

My favorite recipe that uses cooked shrimp is cucumber and shrimp salad. I also love Instant Pot orzo and shrimp scampi pasta. But there are lots of ways to enjoy Instant Pot shrimp.

Step 1: Pour 1 cup of water in the Instant Pot. Put frozen raw shrimp in a steamer basket and set the basket over the water.

Step 2: Cook for "0" minutes at high pressure. When the cooking time is complete, use a quick release to immediately release the pressure.

Is a Pressure Cooker the Best Way to Cook Shrimp?

A pressure cooker is the fastest and most convenient way to cook frozen, raw shrimp without having to defrost it first. That's why I love this recipe!

But keep in mind that using a pressure cooker means you're giving up a little bit of control - you can't peak inside and pull out the shrimp the exact second that they are perfectly cooked.

This recipe steams the shrimp for the shortest possible amount of time (zero minutes). Still, there's a chance that in some cases the shrimp will be slightly overcooked.

But what about frozen, cooked shrimp OR defrosted, raw shrimp?

In both of these cases, the best pressure cooker recipes add the shrimp after the rest of the ingredients have already been cooked.

To see what I mean, try my Instant Pot Orzo and Shrimp Scampi Pasta.

How to Pan Sear, Boil or Broil

If you want more control over the cooking process, then it's better to saute, boil or broil shrimp, using your stove or oven.

Remember, shrimp cooks very quickly. For all of these methods, keep an eye on it as it cooks.

Boil: Bring 4 quarts/16 cups water to a gentle boil. Turn the heat down to a simmer, add the shrimp and boil gently for about 3 minutes until the shrimp have just turned pink/orange. Remove with a slotted spoon.

Broil: Spread the shrimp out on a sheet pan. Tossing in olive oil is optional. Put under the broiler for 3 to 5 minutes. Rotate the sheet-pan as necessary.

Questions & Answers About This Recipe

What about using low pressure or starting with hot water?

What if the shrimp aren't cooked enough?

This is very unlikely to happen, but if it does just put the lid back on the Instant Pot and let the shrimp sit in the pot for a minute or two longer.

Can I use this recipe for frozen, cooked shrimp?

I don't recommend it. My experience is that frozen, cooked shrimp will overcook in a pressure cooker. This recipe works best with frozen RAW shrimp.

Should the shrimp be seasoned or salted?

Many brands of frozen shrimp are already salted. Check the ingredient list before sprinkling salt over the shrimp. If you want to season the shrimp, or add lemon, you can do so after they're cooked.

Does it matter how many frozen shrimp I cook in the Instant Pot?

Nope! You can use this recipe for six individual shrimp, or for a whole pound.

Do I have to use a steamer basket?

Yes. Cooking the shrimp directly in the water will boil the shrimp, not steam them, and the shrimp will be overcooked.

The trivet that comes with the Instant Pot will work too, but it's hard to lift the cooked shrimp out of the pot. A steamer basket is a really good investment. Especially if you want to make Instant Pot broccoli, green beans or cubed sweet potatoes.

Should I use the "steam" button on my Instant Pot?

It's not necessary to use the Steam setting, which has pre-programmed steaming times. It's easier to just manually program the cooking time for shrimp.

What is the best way to reheat cooked shrimp?

There are several ways to reheat shrimp without drying it out. Read my recipe "How to Reheat Shrimp" to learn how.

Cooked shrimp should be kept in the refrigerator and eaten within 2 to 3 days. If the shrimp has gone bad it will have a strong fishy odor.

How is shrimp sold and packaged?

Shrimp, especially frozen packaged shrimp, is labeled according to how many shrimp are in a pound. The smaller the size of the shrimp, the more of them will be in one pound. For example, if "36-45" is on the package, it means there will be about 36 to 45 shrimp in a pound. If "16-20" is on the package, it means the shrimp are larger and there will only be about 16 to 20 per pound.

These shrimp recipes aren't made in your Instant Pot, but if you love shrimp then you'll want to try them! 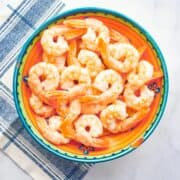 Use your Instant Pot to steam frozen raw shrimp in minutes! Instant Pot frozen shrimp can be served as a quick appetizer or used in any recipe that calls for cooked shrimp.

This recipe was tested using medium shrimp that were peeled and deveined. Medium shrimp are labeled as "21-30" which means there are between 21 to 30 shrimp in each pound. You can also use this recipe for larger shrimp (31-40) or shrimp that have a peel on.

This recipe works best with frozen, raw shrimp. Both frozen, cooked shrimp and defrosted, raw shrimp are likely to overcook, even when cooked for zero minutes.

This recipe was tested in a 6-quart Instant Pot.

If the shrimp aren't cooked enough for your liking, just set the lid back on the Instant Pot and let the shrimp sit in the residual heat for a few minutes.